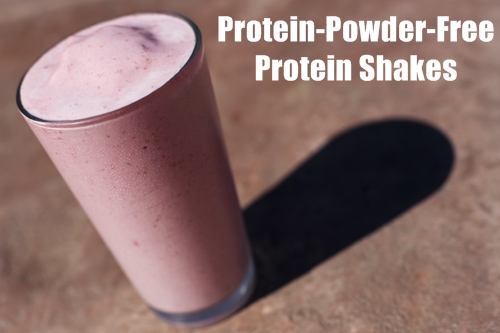 I’ll admit — I’m not a big fan of protein powder. Many taste horrible, are super expensive, contain a ton of junk ingredients, or any combination thereof.

Personally, I use protein powder as a last resort. It’s something I have to use sparingly otherwise I get sick of it very quickly. I think this is because there was a time several years ago when I had at least two protein shakes every day.

Anyway, recently I was craving a cold, frosty shake that was full of protein but without protein powder.

Here’s the simple recipe guide I use:

And here’s one of my favorite recipes:

I toss those ingredients in a blender, mix for a few seconds, and then enjoyed. It’s banana-blueberry goodness with a protein punch.

To create your own shakes just choose from the ingredients in the categories below. At a minimum I suggest choosing a fruit(s), yogurt, and liquid. But you can’t go wrong with additional spice and other yummy ingredients though.

Use any combination of fruit you prefer. I suggest going with whatever is in season, and preferably something purchased locally.

Here are some of my personal favorites.

You can even use canned pumpkin as well if you want something completely different, and I’ll show a sample shake recipe in a moment with pumpkin.

This is where the majority of the protein for the shake will come from. Most Greek yogurt contains about 23 grams of protein per cup.

I use plain Greek yogurt because it’s loaded with protein and free from other unnecessary ingredients.

If you prefer you could also use plain yogurt, but I much prefer the taste of Greek yogurt.

I also like to use Greek yogurt in what I call a high protein cheesecake bowl. That recipe, however, does use protein powder. And finally, cottage cheese is another high protein ingredient you can use that delivers a good dose of protein.

You need some type of liquid to thin out the shake. Use more for a thinner shake and less for a thicker one.

Many of those also come in flavors like vanilla and chocolate, which could be a nice addition to a shake.

These are optional but I like to use some type of spice whenever possible.

Cinnamon is my go-to spice for shakes. I love this stuff and use it liberally.

If you’re more experimental with your shakes you can use other spices like nutmeg, cloves, and allspice depending on the ingredients. In fact, here’s a recipe the uses several spices.

That’s a great shake to enjoy during the fall months since there’s ample amounts of pumpkin available. But, you can also be a rebel and make it during the summer, too.

You’re only limited by your imagination with the spices you want to use.

There are plenty of other ingredients you can throw in your shake for some extra yummy goodness.

Coconut oil. If you want some added fat, this is a great addition and makes for a smooth texture.

When to Enjoy Your Shakes

The best time to enjoy your shake is any dang time you want.

But, these are also useful for people who want a quick and healthy meal that is super portable. If you need a quick meal that will keep you full for a while, then these shakes will work perfectly.

Also, if you’re interested in building muscle these make a terrific addition to your nutrition plan. Simply drink one of these a day, in addition to your other meals, for extra high quality calories.

What about for simple fat loss? I’d never tell you to live off shakes in order to lose fat. That’s just ridiculous. But, these shakes could be a better alternative than a breakfast purchased at a drive through window. If you’re trying to lose fat you could swap out a not-so-healthy meal with one of these shakes, if you prefer.

There’s no magical fat burning benefits to a protein shake. But, they can be loaded with nutrients and protein that will keep you satiated for hours. In that regard, they can be useful for fat loss, especially if you’re drinking one in place of a less-than-healthy option.

So there you have it: a guide for protein packed, but protein powder free, shakes. And if you’re like me and don’t like using protein powders, I think you’ll enjoy these.

Use the Best Tool for the Job

We go through at least one blender a year, so when our last one died we decided to stop buying the cheapest one. After reading reviews (and agreeing that spending over $100 was just ridiculous for a blender) we finally settled on a Ninja. I have to say – this blender is awesome.

It creates the best consistency and blends super quick, even against a lot of frozen fruit. It’s also a terrific tool for pestos and frozen desserts. I strongly recommend you consider the Ninja too. It’s likely one of the best blenders for less than $100. Check it out here (that’s an affiliate link).