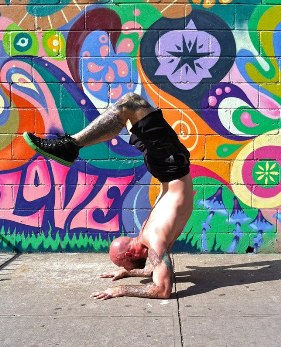 I’m super excited to share this great guest post with you courtesy of Al Kavadlo the author of Pushing the Limits! Total Body Strength with No Equipment and Raising the Bar: The Definitive Guide to Bar Calisthenics.

In this article he’s going to share 5 advanced bodyweight strength exercises. If these are too advanced for you right now, then check out progressions for hip thrusts, pistols, push-ups, and handstand push-ups that will show you how to work your way from beginner to advanced variations.

As bodyweight strength training experiences a resurgence in the mainstream, I am thrilled to see more and more people giving minimalist methods their due. The number of women who are building strong, beautiful bodies with bodyweight exercises like push-ups, pull-ups and squats continues to grow.

Chances are, if you’ve been following Nia Shanks, you’re no stranger to strength. I know Nia’s readers are some of the strongest women in cyberspace. Though for many women, simply doing a full push-up or pull-up may still be a work in progress, for others who’ve been at it long enough, those bodyweight basics may eventually become easy.

One of the biggest misconceptions that’s still floating around about bodyweight strength training is that it can only get you to a certain point. Even if you can bust out pull-ups and push-ups all day, however, there are more difficult variations to keep your training fresh and challenging. Here are five of my favorites:

While a typical push-up involves pressing your body in the horizontal plane, a handstand push-up closer resembles an overhead press. The emphasis moves away from your chest and into your shoulders. Additionally, having your body in a vertical position means you are lifting much more of your total body weight than you are with your feet resting on the ground. The handstand push-up is a double whammy – you’re lifting more of your weight with a smaller primary muscle group!

The muscle-up is a rare animal – an upper-body exercise that requires both pulling and pushing power as well as serious core strength. Though it begins like a pull-up, the muscle-up involves pulling and then pushing your entire upper body up and over the bar. Those unfamiliar with the move might think it’s just a pull-up combined with a dip, but a muscle-up is much more than that! It is truly the king of upper body calisthenics, and you have to be very strong to do just one.

The one-legged pistol squat is a fantastic exercise for building lower body strength, as well as balance and flexibility. Additionally, as it requires no equipment, it’s more accessible for many people than two-legged squats with weight. The pistol is one of the best known single leg squat variants, and it’s become the gold standard for no-equipment lower-body exercises.

The shrimp squat is a challenging single-leg bodyweight movement that can humble even a sharpshooting pistol squatter. Though some folks will get this move easier than the pistol, for most people it will be a bit more difficult to attain. Whereas the pistol has your free leg extended in front, the shrimp involves holding your non-squatting leg behind your back.

Considered by many to be the ultimate bodyweight exercise, the human flag involves gripping a vertical pole and lifting your body into a sideways position like a horizontal handsand. The visual effect literally looks like a human flag! Performing this move requires serious strength as well as lots of practice. You have to be incredibly strong, but you also must work specifically toward the skill.

These beastly bodyweight exercises are just the tip of the iceberg. There are always new variations and progressions to try; the spectrum of bodyweight exercise is incredibly far-reaching. Stay humble, train hard and enjoy the ride.

Al Kavadlo is one of the world’s leading experts in bodyweight strength training and calisthenics. The author of three books, including Raising The Bar: The Definitive Guide to Pull-up Bar Calisthenics and Pushing The Limits! – Total Body Strength With No Equipment, Kavadlo is also known for his work in the popular Convict Conditioning book series. As the lead instructor for the Progressive Calisthenics Certification (PCC), Al gets to bring his unique coaching style to fitness trainers and enthusiasts around the globe. Check out his website, www.AlKavadlo.com for more.