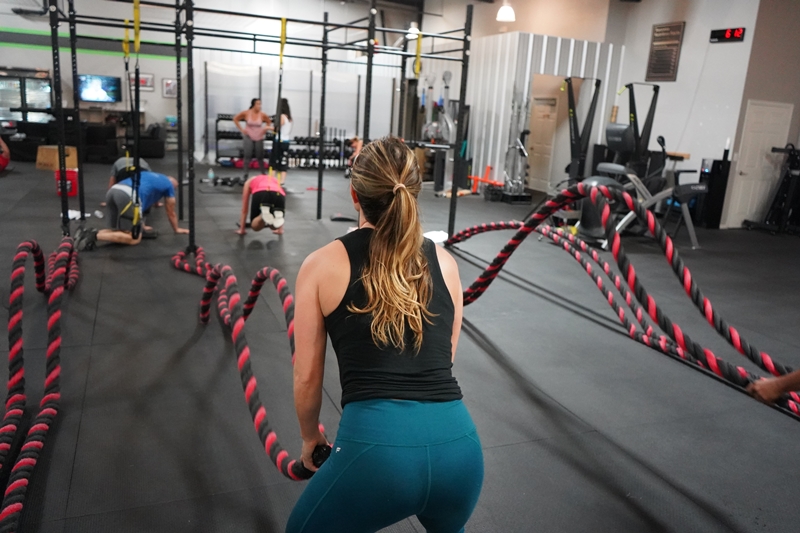 You can listen to this article. Use the player below, download the MP3, or use iTunes.

What is a health or fitness goal you’re currently pursuing?

Do you have a specific number of pounds you want to shed or waist circumference you want to reach? Are you working on running a 5k at a faster pace? Want to deadlift your bodyweight or working on getting your first bodyweight pull-up?

Whether your goals are a bit vague (“I want to lose body fat”) or specific (“I want to squat 100 pounds for 12 reps”), having an outcome to work toward can keep you on track and boost workout motivation. Rather than aimlessly walking through the dark without any sense of direction, goals are a flashlight that help you navigate.

Having a health or fitness goal is great. But a dark side can be lurking just beneath the surface, and too many people end up facing it without even realizing it.

Exposing the Dark Side of Health and Fitness Goals

Getting stronger and discovering what my body can do keeps me motivated to strength train week after week. I like to have a mix of goals I can reach in the near future and lofty goals that take much more time, patience, and proper programming to achieve. This gives me the satisfaction of being able to achieve goals regularly while providing a challenge to work toward. I like that combination.

I’m closing in on a juicy deadlift PR that falls into the “lofty goal” category: 275 pounds for a set of eight reps. There’s nothing particularly special about that weight. I chose it simply because it’ll use most of the bumper plates I have in my gym: two 45-pound plates and a 25-pound plate on each side of the barbell. I want that goal. And I’m getting close.

There have been a few setbacks the past few months from an illness and a stretch of lackluster training that have at times made the goal feel out of reach, but, as alluded to above, some goals demand patience and persistence. Obstacles come with the pursuit of a big goal.

A recent deadlift workout called for 265 for a solid set of eight reps (by “solid” I mean finishing the set with 1-2 reps in reserve). I approached this like any normal workout, with no enthusiasm or hype. It was just a workout — a steppingstone to my goal.

But as I completed the final rep of that set, I realized something: I just set a PR.

And I almost completely ignored this awesome little workout win. All because my focus was squarely aimed at the goal of pulling 275 for eight reps.

Here’s that set right here. My little smirk at the end is because I realized I just set an all-time PR.

That is a dark side of health and fitness goals: Being blinded to what you have done and have achieved because you haven’t yet reached your goal.

I’m not immune to this either. About a decade ago I would’ve shrugged off this personal record as no big deal because it wasn’t the huge PR I wanted. But, thankfully, I’ve since realized that there’s so much more value to working out and building a healthy lifestyle than simply setting big personal records.

After pulling 265×8 I took a few moments to reflect on my training career, and to appreciate how far I’ve come rather than shrugging it off because “it’s not the PR I want.” I thought about the first time I deadlifted 225 pounds (two 45-pound plates on each side of the barbell, a fun and huge PR in its own right) for a single, not-very-pretty rep. And now, 225 pounds is a warm-up weight.

We too quickly and easily toss aside our accomplishments because they’re not the goal we’re after.

This begs the important question: What are you overlooking in your journey because you haven’t reached your main goal?

This dark side of neglecting to appreciate what you have done and what you’re currently doing can take many different forms. For example …

The individual who has lost a significant amount of weight. This person may be obsessively lamenting the “last few stubborn pounds” they’re trying to lose. Because of their fixation on that goal, they disregard the plethora of benefits they’ve already attained: improved health markers, the healthier habits they’ve built and solidified in the gym and kitchen, the physical strength and stamina they’ve developed from working out. (This is why it can be useful to focus on things instead of the scale.)

The individual who wants to perform her first pull-up. This goal isn’t one of the easiest to achieve, and for the woman who’s spent months working toward it, she may become discouraged if the goal still feels a long way off. The thought I should have performed my first pull-up by now! may blind her from all she has done. She’s strengthened the workout habit because, except for a few occasions, she hasn’t missed a workout. She’s increased her strength on numerous exercises, including cable pulldowns and assisted pull-ups.

She’s also discovered, to her surprise, that she’s great at barbell squats and really enjoys them. But, none of those accomplishments feel like enough because she still hasn’t reached her goal.

In the continued pursuit of their goals, the individuals above should make it a priority to reflect often on how much they’ve already achieved instead of blindly lusting after what they haven’t.

What about an individual who is recovering from an injury or illness? This person may not be thinking about a future goal she wants to achieve, but may be constantly looking back at what she was once capable of doing.

The only good option: Make the most of what she can do, where she is. I was in a nasty car wreck that left me with a smattering of injuries. One left me with my right leg in a full-length cast. After a month it got cut to just below my knee, and one of the few exercises I could do in physical therapy with my atrophied thigh was leg extensions. It wasn’t much, but I was grateful to be able to do them after being forced to keep it immobile for so long.

I’ve had the privilege to work with numerous women who’ve recovered from much more challenging events, and their attitude to do their best in the situation has inspired me to this day. They may not be able to lift as much or run as far as they were once capable of, but they find new goals and challenges to tackle, and they celebrate every step of the journey.

The individual who is just starting out, is a strength training beginner, and feels like the road in front of her is long and daunting. This person may think, “It would be great to look back at a lengthy list of accomplishments!” but have trepidation about starting her health and fitness journey. Maybe this person has quite a bit of excess weight to lose to boost her health, or maybe she wants to learn to lift for the first time but is afraid to lift weights.

The best thing to do: Take action. Then celebrate that win and use it to build momentum to take the next step. It can be anything from going for a walk, getting a gym bag packed and set by the door so it’s ready to go tomorrow morning, prepare healthful lunches for the week, watch some how-to videos for exercises she wants to learn how to perform.

The only way to look back on all your awesome achievements is to start collecting them now. Even the smallest wins are worthy of celebration.

You don’t have to become complacent with your health and fitness efforts. But at the same time, don’t identify who you are with what you can do in the gym or the health goals you’re working towards.

Have goals that are meaningful to you, and make sure you enjoy the process required to achieve them.

While you’re here, join the newsletter to receive insider-only information. Enter your email below.