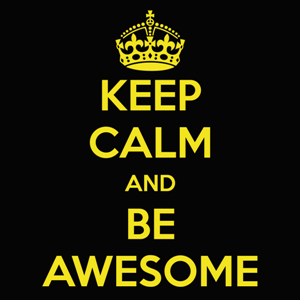 Be the most awesome and strongest version of yourself.

I say it often: “Be the Most Awesome and Strongest Version of Yourself” — and any people respond with, “That sounds great, but, how do I do that?”

So that’s what you’re going to get in this article — the “how to” portion of becoming the strongest and most awesome version of yourself.

I’ll state the obvious before we proceed: there are tons of ways to become a stronger, more awesome version of yourself that have absolutely nothing to do with fitness, nutrition, and working out.

But, that’s the angle I’m taking here — how to be more awesome and stronger with your approach to nutrition and working out. And I most certainly encourage you to become even more awesome in other, perhaps even better, ways as well.

Reject the Notion That You’re Flawed

I’ve heard it dozens of times. “Once I reach X amount of weight or can fit into X size pair of jeans, then I’ll be happy.”

I’ve witnessed these individuals strive to reach those goals, and once they finally do, oftentimes they’re still not happy.

You know why? Because if you think you’re flawed and in need of repair now, you’ll still find other things you want to “fix” once you reach your original “fix my flaws” goals.

There’s nothing wrong with wanting to lose fat, tone up, and build the physique you want. But you must reject the idea that you’re flawed.

Repeat after me: “I am not flawed and I don’t need to be fixed.”

Hopefully you’re determined to demolish any concept of flaws and realize there’s nothing about you that’s in need of “repair.”

So, where do you go from here?

Simple — it’s all about your attitude and how you approach things, especially in regards to working out, nutrition, and self-talk behaviors.

It all comes down to:

Make those attitude adjustments and great things will happen.

Sure, they may not happen over night and you might have to fake it til you make it, but consistency will pay off.

That brings us to our next point.

It’s About What Your Body Can DO

The weight on the scale. Body fat percentage. Tape measurements.

These are the markers most people track when they’re trying to lose fat or build a great looking body – measurements that indicate your physical appearance.

But these measurements say nothing about your self-confidence or the improvements in physical STRENGTH, stamina, overall health, and performance.

THOSE are the markers I truly care about and think should be the most important.

If you’re getting stronger and improving your performance and overall health, then you’ll reap the side-effect rewards of losing fat and building the body you want.

In order to focus exclusively on what your body can do, I suggest employing the following steps.

1) Get off the scale. Don’t rely on the scale to tell you if you’re doing a good (or bad) job.

2) Focus on your performance during your workouts. Nothing else matters.

3) Be proud of what your body can DO. The next time you work out, really pay attention to, and be proud of, your physical abilities. Relish the physical strength you have. Acknowledge your improvements.

It may sound small, but sometimes the smallest changes are the most powerful.

These four changes can drastically increase your rate of success, and it’s why they a  major part of the Train to Be Awesome Guide.

Trying to be perfect is stressful.

Growing up, and even to this day, I wanted to do everything “perfectly”. I made straight A’s in college and dominated tests most students failed. I was the one people hated if there was a curve, because I always screwed it up for everyone else.

It’s not surprising that I applied this same “gotta be perfect” attitude to my eating, health, and performance goals. It’s also a large reason why I battled disordered eating habits for several years.

Trying to be perfect all the time was exhausting, and anytime I “slipped up” and ate something I “shouldn’t have”, I would respond with negative self-talk and beat myself up for “screwing up”.

My attempt at perfection wasn’t working. In fact, it was starting to drive me crazy and I was miserable most of the time. And, oddly enough, even though I was trying to do things perfectly all the time, I still wasn’t getting the results I wanted.

I knew things had to change.

Here’s what I did to ditch the “perfection” mindset, eliminate unnecessary stress, and start enjoying the journey.

1) Workouts – It’s All about Performance. This is discussed above, but all I focused on during each workout was doing a little bit better than last time. I also set measurable performance goals such as being able to do 10 chin-ups, double bodyweight squat, and other goals that kept me motivated and on track. All I cared about was what my body could DO and didn’t focus on how it looked.

You can do the same by setting some strength or performance goals you’d like to achieve. If nothing else, get back to the basics and get stronger.

2) Nutrition – Sane and Simple. Rigid dietary rules and regulations did nothing but drive me crazy and lead to binge eating as a result of restricting foods and food groups, and it’s one reason I strongly dislike things like Skinny Rules.

The simple guidelines I followed were to eat primarily real foods most of the time, enjoy my favorite not-so-healthy-foods about 10% of the time (absolutely guilt free), eat when I’m hungry, stop when satisfied (but not stuffed), eat the foods that made me feel best, and limit those that made me feel not so great.

That’s it. Those two steps helped me break free from obsessive eating habits, allowed me to start loving my workouts once again, and even helped me to build the body I wanted.

If you’re currently stressed from your nutrition and/or workout regimen, it’s time to make some changes.

Remember — it’s about enhancing the rest of your life, achieving your goals, and having some fun along the way.

Check out the free Train to be Awesome Tutorial for much more information.

Fellow Beautiful Badasses Reveal How They Have Become the Strongest, Most Awesome Versions of Themselves

I asked some of my friends whom I deeply respect and admire to share what being the strongest and most awesome version of themselves means to them, and how exactly they go about achieving that goal. 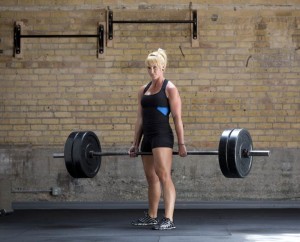 My path to becoming the strongest, most awesome version of myself can be summed up in one word: variety. Here’s the thing about striving to be THE BEST, THE ABSOLUTE BEST at any one thing: You’re prone to burnout (and possibly even injury) from the monotony of the training often involved in achieving a goal single-mindedly.

Man, I used to hate training. I saw it as something I had to do, which is precisely why I rebelled against it and, quite frankly, didn’t do that much of it. My health suffered a long, slow decline, and I was miserable — I became my least awesome version of myself. When I returned to fitness in 2008 after a long layoff, I decided to approach it from a play-based mentality. Rather than listening to the “shoulds,” I started experimenting with what I liked to do. (This, I believe, is the trick to compliance.)

What that ended up being was plenty. I may not be the strongest woman in the fitness industry in any individual pursuit, but I can hang, and I might be the most well-rounded. On any given week, I enjoy powerlifting, Olympic weightlifting, kettlebell training, strongman training, circuit training, primal fitness (in the form of Primal Move and MovNat), calisthenics, sprinting, agility drills, touch rugby, badminton, and any other thing that presents itself as an opportunity to move joyfully. And that, to me, is the point.

Here’s a shot of Jen in action absolutely dominating a 180 pound atlas stone: 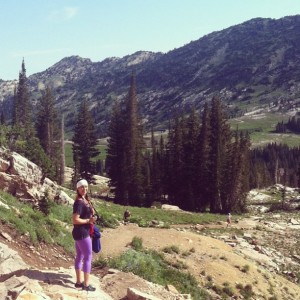 We spent the summer in Salt Lake City, and us Utahns have a hard-core outdoorsy lifestyle. We were hitting the mountains every weekend, going on 3-4 hour hikes each time!

I remember standing at the tippity top of one of the hardest trails we embarked on, huffing and puffing while the muscles in my legs burned, and I was overcome with a sense of strength, immediately followed by gratitude for what my body is capable of doing. It’s things like this that make me feel like the strongest version of myself.

Your Turn to be Even More Awesome!

Only one questions remains — how are YOU going to become the strongest, most awesome version of yourself?

I suggest you begin by implementing some of the tips above.

Maybe you need to set some positive, performance oriented goals.

Maybe you just need to simplify your nutrition.

Maybe you need to cut loose and have some fun with your workouts.

Maybe you need to accept the fact that you’re not flawed and stop trying to “fix” yourself.

Whatever step(s) you choose to take, do so today.

Join the Lift Like a Girl Revolution and become the best version of YOU! Sign up below to get the newsletter AND a free gift (spoiler alert: it’s the Beautiful Badass Mini Course).