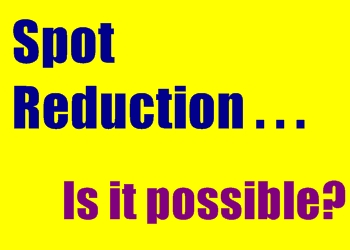 Today’s article is a guest post courtesy of Sol Orwell of Examine.com. He and his crew have been researching supplementation and nutrition for the past 2.5 years and have been provided some of the best information on those topics.

I had the pleasure of meeting Sol at this year’s Fitness Summit, and I have to say he’s an incredibly smart, genuine, passionate, and crazy smart guy. I asked him to bust a popular myth for the readers of Lift Like a Girl, so he offered to tackle the controversial “spot reduction” myth.

What is ‘Spot Reduction’?

Spot reduction is the idea that you can reduce body fat in one area. It’s also known as targeted fat loss, and it’s such an enticing idea that it’s been around for a few decades now.

What evidence is there for spot reduction?

If we are to are to be very technical, there is some circumstantial evidence that spot reduction can be done (and we are ignoring liposuction and other surgical options here). A large part of this circumstantial evidence is that we all have different shapes – when heavy enough, that overall shape is lost. When you lose a bit of fat, your overall body shape shows up (e.g. ‘apple’ vs ‘pear’-shaped). This is often confused as spot reduction (hey, all the fat I lost was in xxxx place!)

Furthermore, some old studies using a topical cream containing some fat loss agents that could be absorbed through the skin (yohimbine, forskolin, aminophylline) have noted fat loss in the areas where they were applied.

Additionally, as we are still on technicalities, exercising a particular muscle will be associated with more regional fat loss than other parts of the body.

If we’re speaking technically, then there is evidence for difference in body fat deposition and weak evidence that you can selectively lose body fat from one area of the body over another

Can I use spot reduction in my regimen?

So while we showed that technically it’s possible, the realistic answer is no.

The fat loss creams we discussed are from a long time ago, and not available anymore. Even then, studies on liposuction (for spot reduction) showed that after the surgery, there was a redistribution of fat, and that body fat levels balanced out.

Despite the aforementioned section, the answer to this question is most likely no. This is due to the aforementioned studies on fat loss creams ceasing the trial at the same point the cream was stopped and without follow-up. While the following isn’t the best example to draw from, studies on liposuction that induce regional fat loss and then assess patients after the surgery note a redistribution and balancing of body fat.

Basically, if you’re somehow successful in losing fat from one part of your body, your body balances itself out. It’s an inescapable reality.

That one study that showed exercising a muscle meant more localized fat loss? They found there was an additional 600-2,100 micrograms of fat lost per 100g adipose tissue. In other words, a 0.02% increase in localized fat loss!

You can attempt to spot reduce, but your body will simply balance out the fat levels.

In what instances might I be able to ‘spot reduce’?

There is really only one instance where a person can have selective and long lasting fat loss from a particular area, and that is losing central adiposity.

Body fat has a few ‘variants’ of itself; subcutaneous adipose tissue (the jiggly fat we observe mostly), retroperitoneal adipose tissue (on the lower back, vital for physically supporting the kidneys and a loss of this fat causes damage to the uterers), and visceral adipose tissue (a hardened fat located around organs in your gut); others that are not seen as bad aesthetically include the brain, mammary adipose, and intramuscular adipose.

All variants of body fat are regulated by differing hormones and cytokines (signalling molecules that act like hormones), and thus you can have one region be larger than it should be relative to another region even if the entire region is the same; in a sense:

However, a loss of central body fat (commonly seen when somebody with central obesity and a very unhealthy lifestyle starts to turn it around) without too much loss in subcutaneous body fat does seem like spot reduction and it can be maintained long after the fat is lost.

And there you go. So can you technically spot reduce? Sure.

Will it make an actual difference? Nope.

So, the bottom line seems to be that spot reduction, for the most part, is a myth.

But what should you do if fat loss is your goal?

Clearly trying to spot reduce is not the answer. I suggest you keep things sane and simple. Click here to check out the free Simple Fat Loss Tutorial that will put you on the right track for losing fat, simply.

And, please, avoid rapid fat loss methods at all costs. They’re not practical, unsustainable, and will most likely lead to regaining any initial fat loss, with interest.

And finally, I’d like to vouch for Examine.com’s Supplement-Goals Reference Guide. It’s the quintessential cheat sheet for supplements based on particular health goals. It’s incredibly thorough and easy to read, and if you use supplements frequently, this is the best resource I’ve come across that will ensure you’re not wasting your hard-earned money on useless supplements. They know their supplements, the science and research, and aren’t trying to sell you their own brand.